The Right of Seniors to a Dignified Life

Renewal Update: Peggy, in Alberta the workers in seniors care facilities are known for their fight for what is proper and just when it comes to looking after seniors. Can you comment.

Peggy Askin: Security in retirement, including pensions and modern and humane seniors’ care, is a right that belongs to all people. The ruling circles continue to present the growing number of older persons in society as a disaster, a “grey tsunami” they say with derision, and demand that seniors fend for themselves.

Time and again Canadians oppose the assertion that society is incapable of providing the right to security in retirement with a guarantee and that seniors should have to fend for themselves and face poverty and insecurity in old age. The conditions in many private care centres are dismal, one could say inhuman, for both the seniors and the care workers.

Renewal Update: The assault on pension plans at the work place in private industries as well as the public sector, and the low level of benefits under the Canada and Quebec Pension Plans, especially for those with no other source of income, are exacerbating the problems for seniors. Can you elaborate.

Peggy Askin: Thirty-nine per cent of Canadians have no retirement savings. The assault on pensions for decades now is part of the neo-liberal anti-social offensive aimed at dragging all Canadians down instead of raising everyone up. During the offensive the ruling elite have gone after workers’ defined-benefit pensions and any guarantee of security in retirement. They have made the focus of pensions insecure savings and defined-contributions rather than extending Canadian-standard defined-benefits to all.

In opposition to the anti-social offensive, the defence of the pensions we have and fight for pensions for all is of great significance to the retirement security of all Canadians. Having a secure income during retirement would go a long way to alleviating the plight of seniors who are forced to fend for themselves. Of course, income is not all that seniors require. Social programs and infrastructure and public services are equally important. Also, seniors should be able to count on proper public care facilities and seniors’ institutions and not have to fend for themselves or depend on their families. Canadians are already overburdened as a result of the anti-social offensive and besides, most are not professionals either in knowing what seniors require for their well-being or how to provide it.

Renewal Update: Active and retired workers have waged battle after battle to defend the pensions they have and to fight for pensions for all. Tell us about this.

Peggy Askin: In a modern Canada pensions must be enshrined as a right, which belongs to everyone by virtue of being human. Workers have a right to pensions by virtue of their contributions as workers, as is also the case with all members of society who have contributed to society and its well-being. Within a socialized economy everyone’s contribution is inter-related. It is a matter of an ensemble of social relations and governments have a social responsibility to uphold the dignity of seniors, but in defiance of this modern principle, they do not. They demean and abuse the right of all to Canadian-standard pensions, reducing it to a matter of affordable or unaffordable costs, and spend their time scrambling about cutting those so-called costs.

In this way, seniors are viewed as an inconvenient element that represents a burden on the budget, which society supposedly cannot afford. If someone can no longer work because of old age, or any other reason for that matter, they are viewed as useless and a cost. This anti-social outlook is unacceptable and backward. The ruling elite use this outlook to present certain seniors who have “fallen through the cracks” as collateral damage of this or that social phenomenon such as what they call the “grey tsunami” of those born during the baby boom following the end of the Second World War. 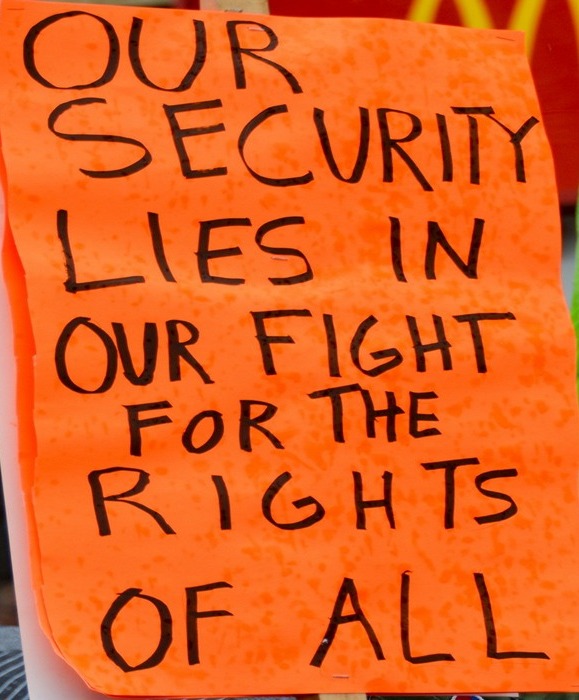 The ruling elite refuse to acknowledge that within the ensemble of social relations, those who are working now not only work for their paycheque in the present, but for when they and others were children and when they and others are old and infirm or injured and sick. The social wealth workers produce is a continuum in the modern socialized economy that goes towards individual well-being and the collective well-being of all members of society. Working people obviously fulfil their duty to work or the economy would have totally collapsed. By fulfilling that duty they have the right to live in dignity from birth to passing away.

Renewal Update: Is the issue of the right of seniors to a dignified life being dealt with in this election?

Peggy Askin: The cartel political parties striving to come to power will promise anything to get elected. These promises are well known to be hollow. When in government, they use all manner of excuses to cut spending on social programs; they support the privatization of care facilities and the entire issue is presented as outside their control because the economy is mostly in the hands of powerful private interests.

Important measures, which would help seniors, such as covering the cost of medicines, are not taken and all kinds of excuses are given. They continue to deny Canadian-standard pensions for all with defined benefits. In fact the reverse has been going on recently with large-scale bankruptcies of companies where the rights of creditors are guaranteed but not the right of workers to the benefits they were promised.

The entire direction and aim of the economy has to be changed so that the needs and concerns of the people and society itself are put at the centre. As it stands, those in control even deny that a society exists and that they as the ruling elite have a duty to uphold its interests, not those of the rich minority.

Denial of the rights of Canadians, by not guaranteeing them in practice, means that the cartel parties in power have lost the moral authority to govern. Any political or economic force in positions of power that attempts to deny the rights of Canadians must be removed. And one thing people have learned from direct experience: workers cannot depend on the gods of plague for solutions, they have to organize themselves and fight to bring the new into being.

Renewal Update: Speak to us about some of the fights workers are waging on the front of pensions.

Peggy Askin: Since 2016 pensioners who work under the Canada Labour Code and federal regulations have combined forces to defend their right to retirement security and to demand the withdrawal of Bill C-27. Workers in the federal public service, post office, airlines, railways, and telecommunications are all affected by this anti-pension bill put forward by the Liberals. This bill threatens to replace federal public sector defined-benefit pensions with “target benefit” pensions, a form of defined-contribution pension resulting in the loss of secured pension benefits

To the credit of retirees and their unions, a strong momentum against Bill C-27 has been built. The campaign included protests in Ottawa and Toronto, petitions and postcard campaigns attracting thousands of signatures, lobbying and meeting with MPs. Importantly, the stark truth was raised in the court of public opinion that the Liberal Minister of Finance Bill Morneau would directly benefit from the change, as the company he used to run and own shares in called Morneau Sheppell, advocates for and manages defined-contribution pensions.

Despite the government’s denial that there was a conflict of interest, the situation was untenable and the bill was stopped at second reading and died on the order paper when the election was called. It shows that the essence of the matter only comes to light when people fight for what is right, which is for the claims they are entitled to make on society. Only when the struggle is taken up in earnest does it win support and gain momentum. This is why it is so important to smash the silence on the struggles the workers are waging on all fronts. Retirees and their organizations must remain vigilant against the reintroduction of any legislation that puts retirement security at risk, no matter which cartel party comes to power. 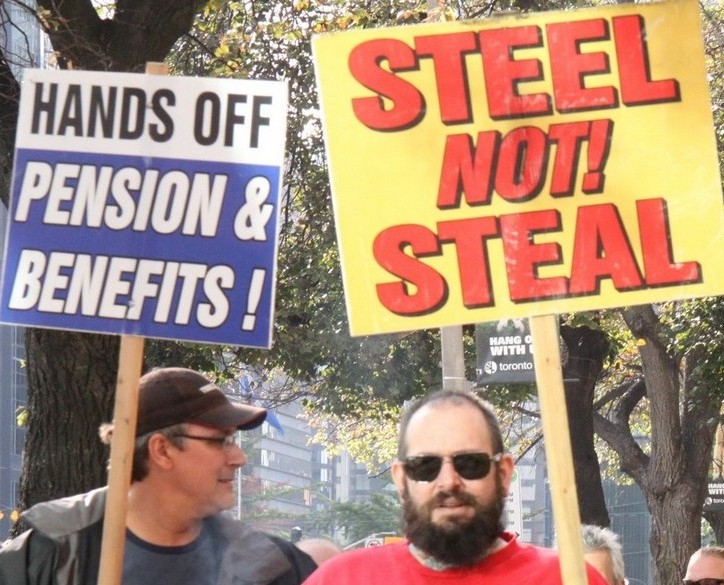 Another example is the fight of many active and retired workers to defend the pensions they have. Hamilton Steelworkers, represented by Local 1005 USW, organized a crucial and tenacious fight to defend the pensions they have and fight for retirement security for the coming generation of workers. Their collective efforts made sure that U.S. Steel could not use the Companies’ Creditors Arrangements (bankruptcy protection) Act (CCAA) to deprive them of their pensions. But of course, the courts rule in favour of companies that claim they are bankrupt all the time. Sears is a notorious example. The CCAA insolvency law allows big corporations to declare bankruptcy and then rob workers of their pensions. It remains on the books and is used to steal workers’ pensions irrespective of which cartel party holds power.

The workers’ fight has been waged under the banner of slogans such as Defend the Pensions We Have! Fight for Pensions for All! The Pension Fight Must be Won! Hands off Pensions and Benefits! Uphold the Dignity of Labour!

Peggy Askin, MLPC spokesperson on Seniors’ Care, and Marxist-Leninist Party of Canada candidate for Calgary Nose Hill, in Alberta, can be reached by calling (403) 283-6545.

Article Link:
The Right of Seniors to a Dignified Life – Interview with Peggy Askin, MLPC Spokesperson for Seniors’ Care