On November 17, the province of British Columbia declared a state of emergency “to mitigate impacts on transportation networks and movement of essential goods and supplies, and to support the province-wide response and recovery from the widespread damage caused by severe flooding and landslides.” The state of emergency will be in effect for 14 days and can be extended. At the time that the state of emergency was declared there were approximately 17,775 people evacuated due to impacts from the flooding, with 5,918 properties on Evacuation Order, and 3,632 properties on Evacuation Alert.

Under the orders, gasoline and diesel fuel purchases have now been limited for non-essential vehicles to 30 litres per trip (applicable to the Lower Mainland, Sea-to-Sky, Sunshine Coast, Gulf Islands and Vancouver Island). There is no fuel limit on essential vehicles. Non-essential travel is also restricted along severely damaged highways.[1]

On November 23, the BC government announced that it is working with the Red Cross “to provide additional financial assistance to help people meet the immediate needs associated with being evacuated due to flooding.”

“Financial assistance will be provided by the Red Cross to people whose primary residences have been placed on evacuation orders due to the flooding and extreme weather event that occurred Nov. 14-16, 2021. Eligible households will receive $2,000,” the release states.

More than 100 First Nations have been directly impacted, with nine First Nations under evacuation order, while others are isolated by washed out or impassable roads caused by overflowing rivers or mudslides. The First Nations Leadership Council (FNLC) stated its deep alarm about both short-term and long-term cumulative effects of the crisis on the safety and welfare of First Nation communities still recovering from the compounded and ongoing emergencies of the 2021 wildfires, the COVID-19 pandemic, the opioid crisis, homelessness and the crisis caused by the discovery of the thousands of unmarked graves on the sites of former residential schools. The FNLC called for significant resources from both levels of government.

First Nations report that they received no advance warnings or notice of the flooding. The First Nations Emergency Services Society (FNESS) reported that it did not hear anything from BC Emergency Management until a day after the floods. Assembly of First Nations National Chief RoseAnne Archibald has called for the federal government to immediately fund FNESS to deal with the specific needs of Indigenous communities during the crisis. Funding to the FNESS for emergency management had been cut off by the federal government.

Impact on Farms and Farm Workers 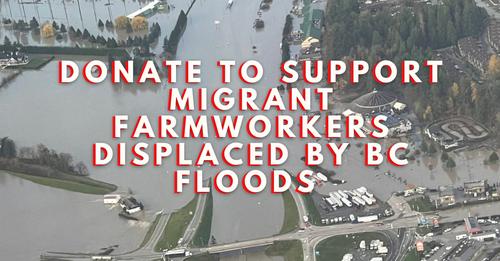 Many farms have been affected, including vegetable, dairy and chicken farms. Thousands of farm animals have drowned due to massive flooding of the rich agricultural plain in the Abbotsford area of the Lower Mainland. As well, animals injured during the flooding require veterinary assistance. The water overwhelming the farms poses its own dangers, contaminated with human and animal waste, asbestos fibers and oil and gas. Thousands of acres of crops have been affected.

More than 600 migrant workers from Guatemala, Mexico, Jamaica and the Philippines have been displaced by floods, some staying in shelters and others evacuated to other farms. Many have lost all their belongings and documents. The workers are working in BC on work permits and contracts that tie them to a specific employer so they cannot work elsewhere and do not have access to Employment Insurance. Migrant Rights Network is raising funds to assist them. To donate click here.

The damage to major highways and rail links was so extensive that Vancouver was cut off for days from the rest of the country, blocking the supply chain of containers shipped by rail and truck from the port of Vancouver across the country. A CN train derailed on a washed-out section of track in the Fraser Canyon and a CP train partly derailed after running into a landslide. It is expected to take months before some of the roads and bridges that have collapsed or been damaged will be repaired.

Two routes connecting the Lower Mainland to the Interior have recently re-opened. Highway 7 connecting to Highway 3 has reopened primarily for heavy commercial vehicles, and Highway 99 connecting to Highway 97, as well as a stretch of Highway 1 east of Chilliwack between Bridal Falls and Hope are now open. The Coquihalla Highway has been badly damaged, including collapsed bridges and at least five sites that are significantly damaged or degraded. Updates are being provided on a daily basis. The Coquihalla Highway is an essential lane for shipping goods, and also the quickest route from Vancouver to several parts of the BC Interior.

The Trans Mountain Pipeline has been shut down since November 14, in what the company describes as a “voluntary, precautionary shutdown.” Trans Mountain is anticipating reopening the line by around November 27. This is the longest shutdown of the TMP since it was built in 1953. Construction of the Trans Mountain Expansion has also been suspended.

1. For information on BC government’s state of emergency click here.