Actions in Many Countries Call for Ending U.S. Blockade of Cuba

A blockade of one country by another is a de facto act of war. The U.S. has been blockading Cuba since 1962, causing untold damage to the Cuban economy and people. Under the presidency of Donald Trump measures were taken to make life even more difficult for the Cuban people, even under pandemic conditions. Now, under the Biden administration, measures to incite a “colour” counter-revolution against Cuba have increased with the administration putting pressure on all countries to isolate Cuba, incite violence and condone social disorder. The use of algorithms on social media to disseminate lies and slanders and make them go viral has now been fully revealed. This is the kind of practice used to justify the genocidal blockade by declaring that the demand for regime change comes from the Cuban people. 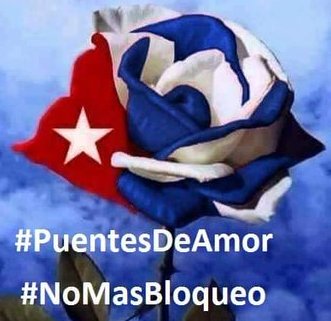 In Miami, Cuban Americans held vigorous Puentes de Amor (Bridges of Love) actions on October 31 to demand an end to the U.S. blockade and other acts of aggression against Cuba. A picket and speak-out was held in front of City Hall with participants undeterred by attempts of counterrevolutionaries gathered nearby to shout them down. The picket was followed by a rally and celebration in the Little Haiti neighbourhood next to the statue of Haitian revolutionary leader Toussaint L’Ouverture. Puentes de Amor leader Carlos Lazo and others gave rousing impromptu speeches at both events, appealing to Cuban Americans irrespective of their ideology to join them in calling on the Biden Administration to stop causing so much harm to Cuban families.

Militant car caravans, pickets and rallies in support of Cuba and the same demands were held in several Canadian cities on October 31 including Montreal, Ottawa, Toronto, Edmonton and Vancouver. The Bridges of Love caravans and actions in support of revolutionary Cuba, its people and their government demanded that foreign governments uphold international rule of law and the UN General Assembly resolutions for the U.S. to end the blockade of Cuba and not permit foreign interference in Cuba’s internal affairs.

The government of Cuba has announced that with the pandemic under control in that country, as of November 16 all-sided measures will be taken to re-open the economy. Cuba will once again be open to foreign travel and tourism and every effort will be taken to not only ensure the safety of the Cuban people and foreigners in Cuba, but to enable Cubans to live their lives free of want despite the crippling sanctions imposed to deprive them of food, medicines and all items they require to produce what they need to feed, clothe, house, educate and look after the well-being of their population.

To cause disruption, the U.S. and the anti-Cuban mafia have set November 15 as the date to foment anti-Cuban activities on Cuban soil. The slogans raised by the Bridges of Love caravans and actions across the world raised the pertinent demands: Hands Off Cuba! No to the Blockade! No to Foreign Interference against Revolutionary Cuba! Meanwhile, for its part, the U.S. is inciting uncouth, foul mouthed, violent counter-revolutionaries of Cuban origin, and others linked to mafia activities in Latin America, to engage in a concerted effort to perpetrate the fraud that it is the Cuban people who are rebelling against an allegedly authoritarian and repressive regime. They claim that to have freedom Cuba needs to open itself to U.S. takeover and adopt the U.S. constitutional order and system of government which is racist, rules over the people in a manner which perpetuates oppression, poverty, hunger, desperation and homelessness and imprisons millions, many in decades-long solitary confinement. All of this is verifiable on the basis of facts, whereas accusations against Cuba are based on rumour, innuendo, defamation and anti-communist ideology, all of which cause grave harm to the people.

The Cuban government has firmly opposed this interference in Cuba’s affairs and counter-revolution on its soil as do Canadians from coast to coast to coast. The Communist Party of Canada (Marxist-Leninist) calls on Canadians and Quebeckers to directly appeal to their members of parliament to not permit Canada to be used as a base to incite a so-called colour revolution against Cuba. Members of Parliament should not associate themselves with the foul-mouthed, uncouth characters who are paid to incite violence and disrupt peaceful discourse. They must speak out against the spreading of lies and use of violence, threats and the crime of genocide to overthrow governments not to the liking of the U.S. and its NATO allies.

MPs should take note of the hearings in the U.S. Congress and Parliament of the United Kingdom which reveal the extent of the use of algorithms on social media by Facebook which incite passions, rile people up, spread uncouth, foul-mouthed accusations, claim they have gone “viral” because they are “popular.” The hearings show how these allegedly popular campaigns are used to blame the people for being the racists, white supremacists and misogynists or left wing extremists. They blame the people for creating the state of anarchy and violence which prevails and the anxiety people are experiencing as a result.

CPC(M-L) calls on Canadian MPs to not permit the covering up of who are the “extremists ” fabricated by Facebook and others like it who admit it is done to make money. Oppose the claims by the likes the U.S. President Biden, Canada’s Prime Minister Trudeau, British Prime Minister Boris Johnson and the heads of NATO and other international organizations under U.S. command, that their interference into the affairs of sovereign countries is democracy-building.

No to Foreign Interference in Cuban Affairs!
Canada, Do Not Give In to Pressure Against Cuba!
Parliament of Canada, Respect Cuban Sovereignty!
No Phony “Colour Revolution” Against Cuba!
U.S. Unblock Cuba!
Cuba Is a Safe Destination — Visit Cuba!

No Solutions from Those Responsible for the Crises

The 2021 Summit of the Group of 20 (G20) was held in Rome on October 30 and 31. In many respects it was a lead up to the UN COP26 Climate Conference in Glasgow with the G20 hyped as the vehicle for the western imperialist alliance headed by the U.S. to lead by example, as “mankind’s hope,” “the last chance saloon” and the like, as if those who are responsible for the crises into which the peoples of the world have been plunged are capable of, or even interested, in providing solutions.

The G20 brought together heads of governments and representatives of the financial oligarchs who control about 80 per cent of the global wealth production. They were called upon by the World Health Organization (WHO) to commit $23.4 billion to “bring COVID-19 vaccines, tests and drugs to poorer countries in the next 12 months.” This is but a small fraction of the hundreds of billions in financing arrangements discussed at the Rome summit, yet the G20 would make no such commitment. Calls for Big Pharma to waive intellectual property and patent restraints so as to make vaccines accessible worldwide were also ignored.

The hype that the western imperialist system of states which dominate the G20, with the U.S. at its head, would lead by example at the UN Climate Summit in Glasgow also fell flat on its face. One of the few specifics contained in the final Rome Communique is a pledge “to stop financing new, unabated coal plants internationally by the end of this year.” No pledge was made to reduce existing reliance on coal-fired energy. For all the talk of climate leadership, the G20 even backtracked on their existing Paris Summit pledges for net-zero greenhouse gas emissions by 2050. Justin Trudeau put the most recent excuse for inaction succinctly when he spoke at a press conference in front of the Dutch Parliament on October 30.

The transcript of the news conference shows Trudeau saying that the fight against climate change can’t be defined by targets alone; they must also be matched by a realistic plan to shift the economy to cleaner energy sources. Canada, as a major oil and gas producer, cannot be easily compared to a country like the Netherlands that engages less in fossil fuel extraction, Trudeau said.

“So much of the energy is around setting the targets rather than digging into actually having a concrete plan or roadmap to get there,” Trudeau said.

In other words, in the name of the climate emergency, governments will use their prerogative powers to fund the projects the oligopolies demand they finance with public funds. Not satisfying the interests of the peoples of the entire world by making sure vaccinations be provided to all countries, is presumably not a matter of having a “concrete plan or roadmap to get there.”

The G20 leaders are not serious about dealing with the problems as they exist objectively. That’s what events like the G20 Summit reveal. G20 Finance and Health Ministers meeting on October 29 issued a communique which says that the COVID pandemic “revealed weaknesses in pandemic prevention, preparedness, and response.” They have no shame and take no responsibility for the anti-social offensive and demands of the neo-liberal global economy that created these “weaknesses.” These weren’t oversights. Existing pandemic prevention and preparedness plans were dismantled consciously and deliberately. Restructuring public services such as health care, including selling off Canada’s own vaccine production capacity, privatizing long-term care homes, hospitals, staff reductions, wage freezes, etc. all played and continue to play their role in setting the stage for the disaster which Canada experienced with COVID 19. All the “advanced” western imperialist countries experienced similar results from their anti-social restructuring of society and neo-liberal agenda while their super-exploitation of the countries they target with sanctions or keep under the thumb of imperialist financial institutions also cause disasters in those countries, in many cases at the hands of corrupt puppet regimes. 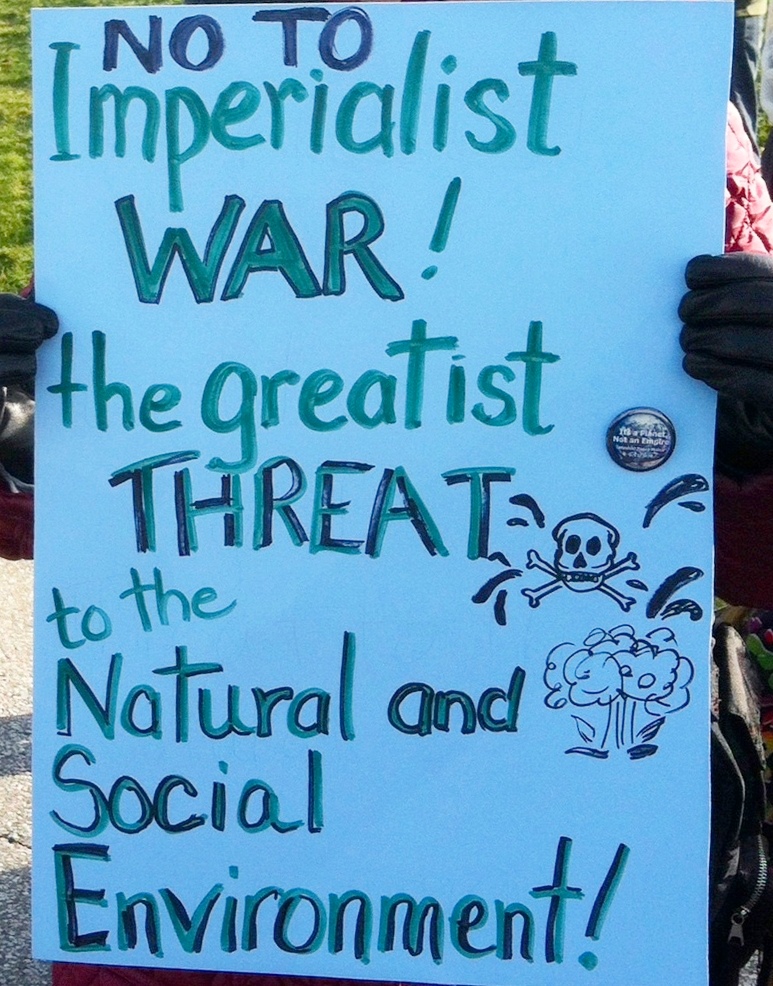 As for carbon emissions, the focus of the G20 was on financial arrangements for the global financial oligarchs to make a killing on “greening the economy,” in the same way they make a killing on war and armaments production. It is an established fact that the U.S. Department of Defense is the world’s single largest institutional consumer of petroleum. Seventy per cent of that energy gets consumed by moving and utilizing troops and equipment around the world. Eliminating U.S. troop movements is one logical place to make huge reductions in greenhouse gas emissions.

A 2019 report from Brown University estimates that since the invasion of Afghanistan in 2001, the U.S. military has emitted 1,212 million metric tons of greenhouse gases and that in 2017 alone, CO2 emissions totalled 59 million tons – more than the emissions of many industrialized nations. According to the Brown University research, the Pentagon would be the world’s 55th largest CO2 emitter if it was a country.

The conclusion to draw from the G20 Summit is that no solutions are forthcoming from those whose narrow self-interests create these problems. The necessity for democratic renewal, to put the decision-making power in the hands of the people calls on all those concerned, and especially the youth, to support the protests and actions held in conjunction with COP26, actively demanding a new direction for society.

No solutions can be expected from the government representatives of the global oligarchs. Democratic renewal is the historic necessity for humanity to harness its productive capacities and put them in service of its well-being and that of the planet.

Send your articles, photographs, reports, views and comments to editormlpc@cpcml.ca