U.S. Hostility and Interference in Matters of International Trade

Canada has joined the mounting U.S. drumbeat for war with China which is a disastrous path that should not be pursued. What good will come of condemning China as a competitor and enemy that must be crushed? Those shouting for this to happen are the same oligarchs who view all competitors as enemies to their private interests and consider the working class as disposable without rights, a say or control. Other oligarchs manage mega corporations whose wealth is acquired by selling goods made in China and their narrow private interests are not served by the warmongering. It means the contradictions within the ranks of the ruling class are very sharp and none of it favours the interests of the peoples of the world.

The U.S. high tech cartels such as Parallel Wireless, Mavenir, and Altiostar and their political vassals have now made it known that all countries in the U.S.-controlled imperialist system of states must boycott and eliminate all competition from Huawei and its 5G networks and expertise. The U.S. oligarchs’ fear and loathing arise from the reality that their 5G and other technical expertise lag behind Huawei and that China’s economy will soon displace the U.S. economy as the largest in the world. They concocted the anti-Iran charges against Huawei executive Meng Wanzhou as part of the campaign to stop Huawei from expanding into “their” territory, including Canada, and competing with “their” companies.

The people did not discuss or decide to conciliate with the U.S. imperialists. They have not been consulted about becoming further embroiled in the campaign of hysteria and hate to contain China and block its companies from operating in Canada and other countries. Disinformation is used that free trade does not apply to China for this or that reason which Canadians cannot verify. Canadians are also not to blame for the state-orchestrated racism against people of East Asian ancestry.

The consequences of Canadian authorities acquiescing to the criminal demand of the U.S. to arrest a leading Chinese business personality were immediate on the front of trade. Canadian canola exports to China in 2019 fell 70 per cent resulting in an estimated $1 billion in lost export revenue. Prior to the downturn, China accounted for about 40 per cent of all Canadian canola seed, oil and meal exports, writes the Canola Council of Canada.

Canada’s share of total lumber exports to China fell from 24 per cent to 10 per cent between early 2019 and early 2020, data from consulting firm Wood Resources International show. Canada’s exports of wood and wood-products to China dropped by 35.06 per cent from 2019 to 2020 to date; with the export value of wood pulp, waste paper, scrap paper and paperboard also decreasing 19.08 per cent over the same period, according to statistics provided by the consulting firm.

In its July GDP summary, Statistics Canada says the agriculture, forestry, fishing and hunting sectors witnessed a large production drop of 5.5 per cent. “Crop production (except cannabis) dropped 13.2 per cent in July, reaching its lowest level since the fall of 2007.” StatCan does not address whether this drop relates to Canada’s involvement in hostility towards China under the instigation of the U.S. but others in the agricultural and forestry sectors say a direct connection exists.

The global accounting company BDO writes in retrospect, “March 2019 marks the start of Chinese importers halting their purchase of Canadian canola seeds. Forty per cent of Canada’s canola exports go to China, accounting for billions of dollars generated annually. In 2017, Canada exported $3.6 billion worth of Canola to China. The same year, exports of canola seeds and products generated $1.72 billion for Manitoba’s economy alone. In mid-March 2019, when China halted new purchases of all Canadian canola, the price impact was immediate to this significant contributor to the economy. The price of canola suddenly dropped.” 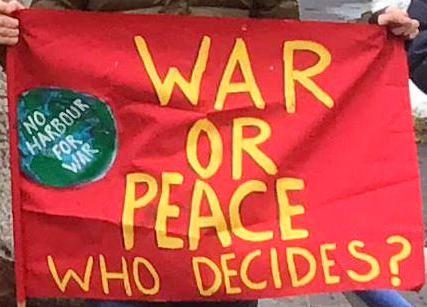 Canadians need the government to cease its hostility against others at the behest of U.S. imperialism. A move towards trade for mutual benefit begins with opposing imperialist warmongering in international relations. This means disengaging from the U.S. war economy, war preparations and Homeland Security. It means establishing an anti-war government and getting out of NATO and NORAD.

On the economic front, for a country as large as Canada, which has a developed socialized economy of industrial mass production with vast natural resources, trade for mutual benefit is associated with building a self-reliant economy. For Canada, self-reliance forms an economic base from which trade for mutual benefit forms a positive alliance. Both give strength to the other from which the economy can meet the needs of all.

Demand a new direction for the economy towards self-reliance, trade for mutual benefit and an anti-war government!

(With files from the Canola Council of Canada, Statistics Canada and “Impact of canola price drop on Manitoba grain farm” by BDO)

Surrounding China and the DPRK with
Troops and Military Alliances

The U.S. has entered into several known military agreements to surround and threaten China, the Democratic People’s Republic of Korea and indeed all the peoples in the Asia Pacific region. Canada is participating in carrying out these agreements which bolster active U.S. military presence in the region. Already the U.S. stations tens of thousands of troops and war materiel and equipment in Japan, south Korea and several south Pacific islands. The U.S. military regularly sends warships and planes to prowl the waters surrounding China and the Korean Peninsula to probe and test the defences of both countries. Canada was the first U.S. ally to join it when it sailed the navy frigate HMCS Winnipeg alongside the USS Dewey in a war convoy through the Taiwan Strait just off the coast of the Chinese mainland October 14-15. 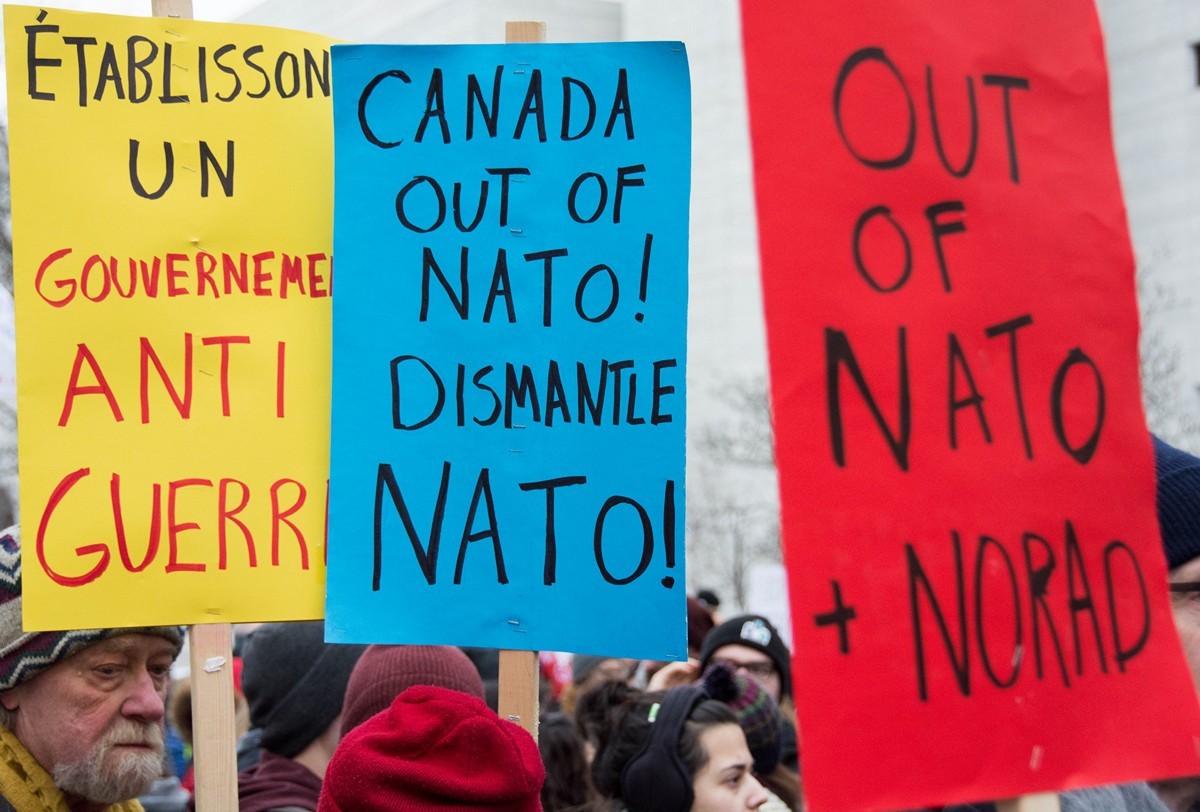 The warmongering has become particularly intense with the U.S. and UK militaries entering this strait separating mainland China and the island of Taiwan, which at its narrowest point is only 130 kilometres wide. The U.S. is inflaming the situation by appearing to want to station troops, warplanes and ships in Taiwan as a close staging ground for an attack on China. The U.S. imperialists are doing everything they can to inflame passions over the issue of Taiwan reuniting politically with China. The One China policy was settled a long time ago. The U.S. is refusing to permit peaceful political settlements of any issue in the Asia Pacific region.

Canadians can play a positive role in opposition to these war preparations by joining the campaign to Make Canada a Zone for Peace, demand disengagement with all current war alliances and war preparations with the U.S. including NATO and NORAD, and extricate the Canadian economy from the U.S. war economy. Work must be stepped up for political renewal where Canadians themselves decide matters of war and peace, not executive powers which do the bidding of the U.S.

The following war treaties and arrangements of the ruling elite are directed against the interests of the peoples everywhere, including those countries where the alliances originate, and must be sternly opposed and rejected. The struggle to Make Canada a Zone for Peace and to establish an anti-war government requires the people demanding the dismantling of all these war alliances and preparations including NATO and NORAD, and the removal of Canada from the U.S. war economy.

The U.S. maintains a large military presence of bases, troops and war equipment in south Korea that is used to intimidate and blockade the Democratic People’s Republic of Korea (DPRK), threaten China and suppress the people’s democratic movement in the south for peaceful reunification of the Korean nation.

The “Treaty of Mutual Cooperation and Security between the United States and Japan” has been the official agreement since 1960 to prolong the U.S. military occupation of Japan. Today, the U.S. military maintains 78 facilities throughout Japan with approximately 50,000 active-duty U.S. military personnel along with approximately 40,000 dependants and another 5,500 U.S. civilians employed by the U.S. Department of Defense. The U.S. military headquarters in Japan is located in Yokosuka near Tokyo, the home base of the U.S. Navy’s enormous Seventh Fleet. The 3rd U.S. Marine Expeditionary Force is based in Okinawa where the U.S. Air Force also has a large base in Kadena and is attempting to build a new base in Henoko despite almost unanimous opposition of the people of Okinawa.

Acquisition and Cross-Servicing Agreement with Japan

The U.S. concluded the Acquisition and Cross-Servicing Agreement with Japan in 1996, which extends Japan’s military obligations to the U.S. to the entire Asia Pacific region.

The Aukus is a trilateral military pact announced this September 15 involving Australia, the United Kingdom and the United States. The pact includes war preparations to attack China and the DPRK, and an agreement for Australia to buy nuclear powered submarines from the U.S. war economy. This unilaterally cancels an earlier contract for Australia to buy non-nuclear powered submarines from France.

The three war partners will cooperate in sending warships and planes throughout the Asia Pacific region and coordinate spying and cyber-activity directed at China, the DPRK and all peoples of the region. The UK recently ordered its Royal Navy/Royal Air Force Carrier Strike Group led by the new multi-billion dollar HMS Queen Elizabeth aircraft carrier to sail close to China.

The Quadrilateral Security Dialogue, also known as the Quad, is called a strategic dialogue involving the United States, India, Japan and Australia. The Quad was initiated in 2007 and has recently been amped up with in-person meetings of the four heads of state on September 24. The Quad is not merely a dialogue as it includes military training exercises. The U.S., India and Japan participated in the Malabar naval war games in 2017 and again in 2020 conducted under the Quad framework. The U.S.-Australia military training exercises for amphibious attack operations called Talisman Saber have involved Japan’s military since 2015.

Send your articles, photographs, reports, views and comments to editormlpc@cpcml.ca