Seniors from coast to coast to coast are standing up for their rights and the rights of all. This summer saw seniors in Toronto hold a Tenants Speak Out to demand rental housing fit for habitation and a life lived in dignity. 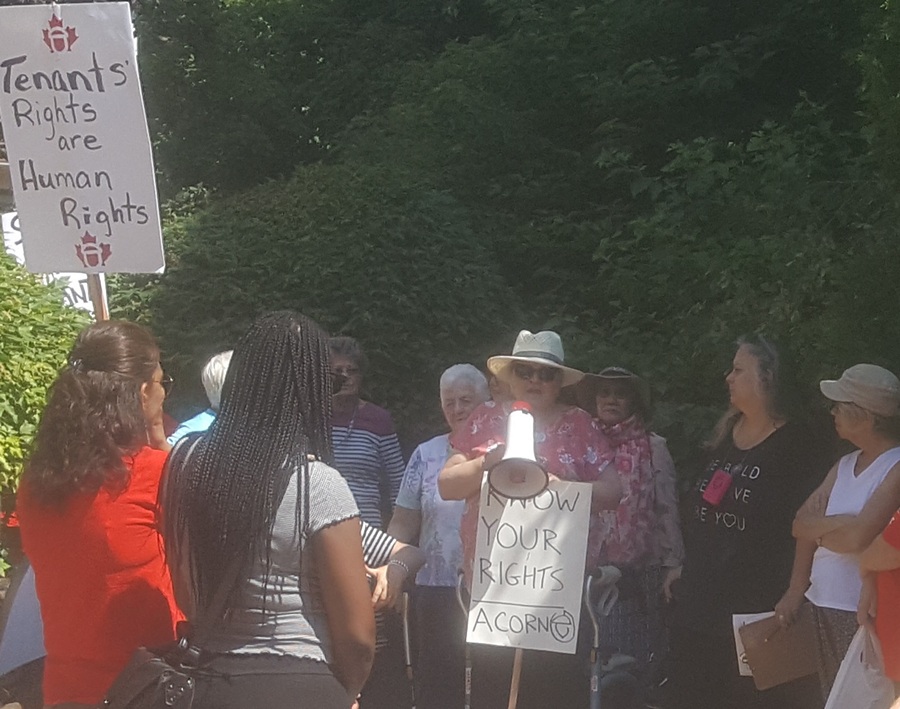 The residents of two seniors’ housing buildings in Toronto organized a Speak Out in July to demand action from their property manager, the City of Toronto. The residents explained that they have been dealing with a bedbug problem for years. As well, they have no access to the recreation room on the property and have great difficulty having issues of routine maintenance addressed. As well as jointly filling out complaint forms, the residents discussed how to organize themselves more effectively to defend their rights.

In Quebec City, a group of seniors won a fight against a rental increase at their privately operated seniors’ residence. “We stood our ground, and we won — and that can inspire,” said Marc Pettigrew, 91, one of the seniors who took their case to the rental board.

In Calgary, seniors are active in the campaign waged for the past three years by community and labour groups to defend the right to public services, particularly services for the city’s most vulnerable. Seniors played a major role in opposing the $60 million budget cut the Calgary City Council approved last July. The cuts resulted in the termination of 155 workers and significant reduction to public services including the fire department, transit and affordable housing. Seniors and other concerned Calgarians wrote letters, conducted petition campaigns, and filled the City Hall galleries to say No! to these cuts.

Calgarians, including many seniors, line up at City Hall to oppose budget cuts.

One week after approving the cuts, City Council stuck a dagger into the heart of the people by approving a huge pay-the-rich scheme. It agreed to pay half the costs of building a new sports arena, mainly for the benefit of the privately-owned Calgary Flames. The City will contribute almost $300 million to the construction, while the private consortium, Calgary Sports and Entertainment Corporation (CSEC), will use the infrastructure to organize events from which they will seize all the revenue.

Many of those active in the campaign to defend city services and programs have now broadened their activities to include actions against the anti-social offensive of the Kenney Conservative provincial government.

In Edmonton, Public Interest Alberta’s Seniors Task Force has waged a protracted campaign for modern and humane seniors’ care. They have highlighted four areas of major concern in the continuing care system. Alberta and other provinces are increasingly replacing long-term care with private “supportive living” where seniors and their families are forced to shoulder high out-of-pocket costs for medications, medical equipment, supplies, and even pay to be assisted to go to the dining room for meals or to have meals delivered to their rooms. They also highlight the fact that the referral system is so opaque that it makes accessing care confusing and difficult. The Task Force together with Friends of Medicare are fighting for legislation to mandate staff-to-patient ratios in seniors’ care and finally to eliminate the profit motivation and aim that comes with corporations providing an increasing share of seniors’ care.

Members of the Seniors Task Force have always stood shoulder to shoulder with workers who provide care in seniors’ homes, noting that the working conditions of the workers are the living conditions of seniors. They recognize that the work and contribution to society of workers engaged in caring for seniors is invaluable. They have many times walked the picket line with workers fighting to organize their sector to attain Canadian-standard wages and working conditions acceptable to the workers themselves. Broadly recognized is the right of workers to organize into collectives and negotiate their terms of employment and not be subjected to employer and government dictate.

Rally at the Points West Living Alberta Corporate Office in Edmonton to demand the company lift the lockout of its employees in Cold Lake and stop attacking their wages and working conditions and the living conditions of the seniors in their care, February 3, 2017.