For 18 days beginning on June 13, Indigenous and working people in Ecuador took part in a national strike to demand the government address the urgent needs of the population related to the extreme precariousness of their living conditions, with prices that make food, fuel and other basic necessities inaccessible. They also called for action to reverse the chronic defunding of health and education, starvation prices paid to small producers of agricultural goods, aggressive mining practices, and lack of respect for the collective rights of Indigenous peoples, among other things.

By the time the strike ended on June 30 six people had died, hundreds were reported to have been injured, some 150 arrested, and many more had their constitutional and human rights violated by state security forces.

The strike was initiated and led by the Confederation of Indigenous Nationalities of Ecuador (CONAIE). After a year of unsuccessful negotiations it said it was clear the neo-liberal government of wealthy former banker Guillermo Lasso had neither the will nor the capacity to respond to the peoples’ social demands.

Other Indigenous and peasant organizations, organized workers in various sectors, students, women, medical and education professionals and other working people, along with those opposed to the government’s extractive policies were among those who joined the national mobilization in support of the 10-point agenda put forward by CONAIE.

Its agenda called for specific measures to address the grim economic and social conditions faced not just by the Indigenous peoples, but by the majority of the population. These conditions are due to the neo-liberal anti-social offensive that, in keeping with the dictate of the International Monetary Fund, above all prioritizes paying the rich. They included:

– no further increase and a reduction in the price of gasoline;

– a moratorium and renegotiation of bank debts for more than four million families;

– employment and labour rights with policies to curb precariousness and support for the popular economy;

– funding for health and education;

– a moratorium on the expansion of the extractive mining/oil industry in Indigenous territories;

– respect for 21 collective rights of Indigenous peoples relating to Intercultural Bilingual Education, justice, and free, prior and informed consent, among others;

– an end to the privatization of strategic public assets and sectors;

– security and effective public policy to stem the high levels of violence and crime. 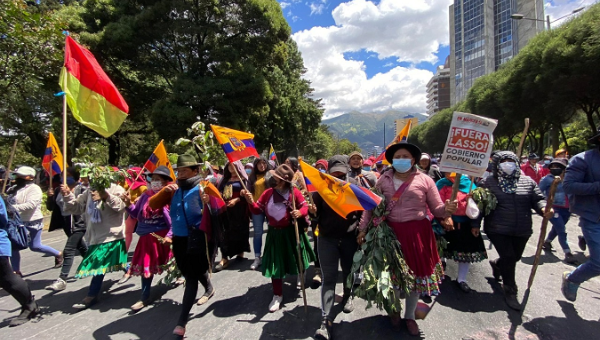 Large protests were mounted around the country, with roads blocked, disrupting important supply chains and shipping routes. President Lasso immediately responded by sending the police and army to violently repress the protests, and declared a state of emergency in several provinces, suspending basic constitutional rights.

On Day Two of the strike, CONAIE’s leader Leonidas Iza was arbitrarily and, he claims, illegally arrested and detained, accused of paralyzing the nation’s public services and inciting violence. This brought even more protesters into the streets of the capital city, Quito, to demand his release. Less than a day later he was out of jail, though with conditions and charges he still must face.

The repression continued and intensified. Instead of meeting with the organizers to finally consider their demands, Lasso declared a state of emergency for 30 days in six provinces. He used it to mobilize the armed forces in the face of an alleged “serious internal commotion,” to outlaw protests, arrest participants and impose a curfew.

“We have been told that we are sabotaging and carrying out terrorism because poor people have come out to fight, but the law protects the rich who have their economic resources in tax havens,” said Iza. That was an obvious allusion to Lasso himself, whose offshore holdings listed in family members’ names were mentioned in the Pandora Papers.

As days went by scenes in the streets of Quito started to look very much like those in Chile in 2019 and 2020, and in Colombia during the national strike in 2021 when young people were brutally attacked, killed and maimed by militarized police simply for putting forward legitimate demands and defending their rights in the streets.

On Day Eight of the strike, the National Assembly intervened, passing resolutions against Lasso’s “erratic, repressive response” to the strike. They demanded that the Constitutional Court put a stop to the malicious use of judicial institutions and mechanisms to criminalize and repress people for taking to the streets to demand governments implement their election promises and address the dire situation faced by families.

Meanwhile thousands of Indigenous people and others from around the country continued to descend on Quito to back CONAIE’s declaration that it would maintain the strike indefinitely until its 10 calls for action were heard by the government.

In a speech on Day 12, Lasso upped the ante, claiming the strike was an “attempt to destabilize our democracy” and that there was “proof” violence was being used with the intention of generating a coup. He said there were “criminal groups” behind the strike, and called for the “international community” to be vigilant.

The National Assembly then took action again, this time with a resolution put forward by the opposition Union for Hope bloc calling for the president to be dismissed. Under Ecuador’s constitution dismissal of a president by legislators requires that parliament also be dissolved and a general election called to replace (or reinstate) everyone. The resolution to dismiss enjoyed considerable support and majority approval, but failed to reach the two-thirds majority needed to pass. It seemed to work, however, to get Lasso to lift the state of exception he had imposed on six provinces, if only temporarily. In a few days, on Day 17, it was back again, this time countrywide, except in Pichincha province where the capital city is located.

The repression in the streets and Lasso’s smear campaign, aimed at creating splits among the three Indigenous groups leading the strike and between CONAIE’s leadership and its base did not stop, but continued to escalate. So too did the people’s refusal to back down, break ranks or respond to provocations.

Their resistance and determination to force the government to sit down with them to address their legitimate demands remained strong. They knew that Lasso — with his approval ratings already in the cellar, and despite all his bravado, threats and ability to wield police powers — was walking a fine line. He was refusing to negotiate with the likes of CONAIE, an experienced organized force, which had already brought down two of Ecuador’s presidents over the past 25 years.

And then the breakthrough came. The government agreed to take part in a dialogue with the strike leaders, with the Catholic Church mediating. One day later, on June 30, the government and CONAIE announced that the strike was over and the state of exception called off, based on agreements reached between the parties.

Some of the main things the government agreed to enact through executive decrees include:

– All governors must intensify control operations to prevent and eradicate price speculation.

– The national government declares an emergency in the health system.

– Compensatory public policies are to be promulgated for the rural and urban sectors.

– The Lasso administration is committed to repealing Decree 95, which reduced the State’s participation in oil activities and promoted international bidding for oil fields.

– Authorities will reform Decree 151, which relates to mining activity in protected environmental areas, untouchable zones, archaeological zones, and water sources. The reform is expected to include provisions to ensure that communities are consulted before mining projects are implemented in those territories.

– The budget for Intercultural Bilingual Education, one of the rights of Indigenous peoples, is to be doubled.

– Policy of targeted subsidies including an increase of $55 for the most impoverished people in both urban and rural areas of the country, and debt forgiveness of up to $3,000 by BanEcuador

– The Lasso administration is committed to repealing the “State of Emergency” as the situation in the territories involved begins to return to normal.

– Issues pending resolution will be dealt with in a dialogue process in the presence of guarantors over the next 90 days.

The agreement was signed by Leonidas Iza for CONAIE; Gary Espinoza for the Leadership Council of the Council of Evangelical Indigenous Peoples and Organizations of Ecuador (FEINE) and Eustaquio Tuala for the National Confederation of Peasant, Indigenous and Black Organizations (FENOCIN) as well as the Minister of Government, Francisco Jiménez.

Writing about the fight that was waged and what it achieved, Leonidas Iza said:

“Because we fought we were able to win measures to alleviate the economic situation, health and education of vulnerable families in the countryside and the city; decrees were issued to defend life.

“The next 90 days, in which the dialogue and follow-up will be held of the agreements reached by the people, need to be of absolute vigilance and alertness. The growing popular organization will not allow the most resounding popular triumph in decades to be trampled upon.

“It has become evident that bourgeois democracy allows its own manipulation at the convenience of the class. To trust in the good will of the capitalist class would be naive. The people remain vigilant as well about the judicial processes against the political prisoners persecuted during the National Strike.”