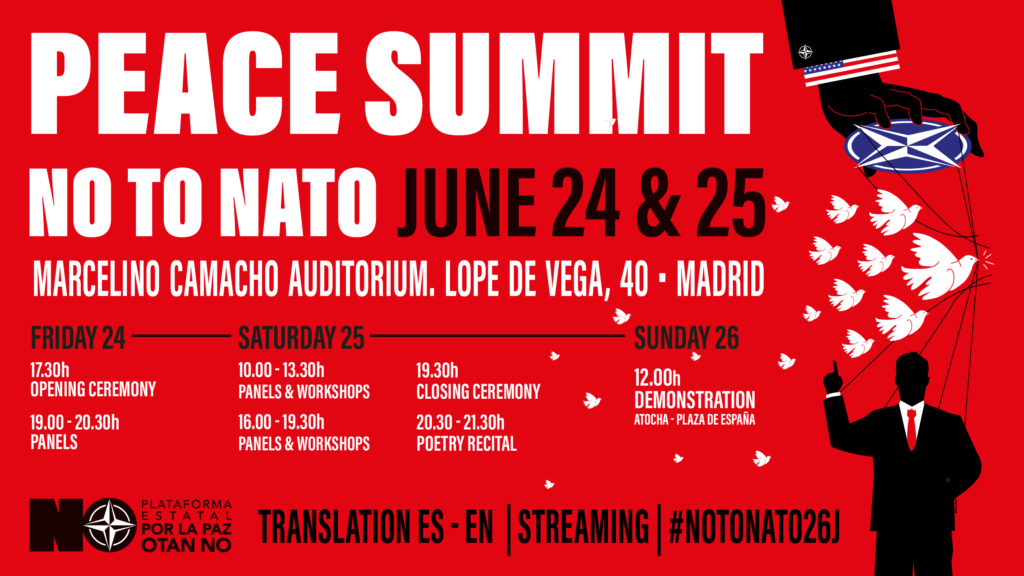 The NATO Counter Summit, held in Madrid from June 24 to 26 issued an appeal for individuals and organizations striving for peace to sign onto their declaration and to work to disband NATO. To sign onto the declaration, click here.

The full text of the declaration reads:

NATO must be disbanded. The alliance has no legitimacy and only sows despair.

NATO pretends its parochial interests are universal. NATO violates the UN Charter and cynically uses concepts such as ‘democracy’ and ‘human rights.’ From its inception, NATO had authoritarian, fascist, and colonial regimes as part of its alliance.

NATO threatens world peace. NATO-led military interventions have disrupted and destabilized Yugoslavia, Afghanistan, and Libya. Now, NATO escalates a ‘new cold war’ against China and Russia along the borders between Ukraine and Russia as well as in the Black Sea and the China Sea; NATO acts against progressive governments across the Global South.

NATO drives the global arms race. NATO, whose members must spend at least two per cent of their GDP on the military, is responsible for more than half of global military spending and two-thirds of the global arms trade.

NATO’s nuclear agenda endangers our survival. NATO rejects the Treaty on the Prohibition of Nuclear Weapons and NATO’s behaviour of sharing ‘forward-deployed’ U.S. nuclear weapons in the European Union contradicts the letter of the Non-Proliferation Treaty.

NATO is one of the biggest climate polluters in the world. The U.S. military is the largest institutional polluter in the world, responsible for more greenhouse gas emissions than countries the size of Portugal (it insists on exempting military emissions from country-based reports). NATO operates as the police force of the biggest carbon polluting multinational corporations.

We need a non-military security system, without nuclear weapons, overseas military bases and a drastic reduction in military spending. We stand for an active peace policy, where conflicts end at a negotiation table based on the UN Charter.

Invest in social progress, not war. What we need is a different concept of security. A common and human security that fulfills human needs and fights climate change, inequality, poverty and violence, and is based on solidarity, cooperation and mutual respect.

Europe and North America must commit to disarmament. The concept of the Zone of Peace — adopted by Latin America, Africa, South-East Asia, the South Pacific, and Central Asia — must be endorsed by the European Union and the countries of North America.