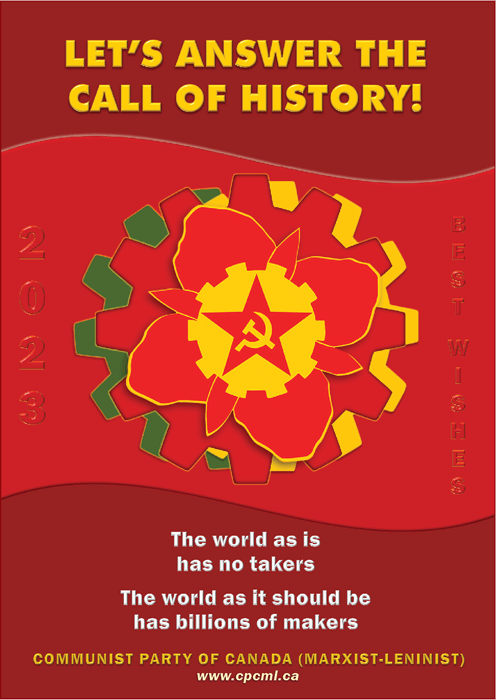 On the occasion of the New Year, the Communist Party of Canada (Marxist-Leninist) sends revolutionary greetings to all its members and supporters and to the working class and people from coast to coast to coast. We also greet our sister parties and the peoples the world over who are courageously fighting for their right to be, resisting the most vicious onslaught of the forces of darkest reaction on every continent.

As we enter the New Year, the ruling class speaks of nothing but the difficulties which lie ahead in 2023. We encourage everyone to look instead at the successes they are achieving as they unite in action with co-workers, neighbours, friends and fellow-travellers to fight for what belongs to them by right as the producers of all the wealth society depends on for its living.

The question of who makes history is an age-old one. But the fact remains that without the people there can be no history. As long as there are people there will be history. There is no doubt that the present period which has appeared in history is a difficult one. The old forms have outlived their purpose while new ones based on mass democratic methods and aims have yet to come into being. But it is necessary to see that the people are bringing them into being by speaking in their own name and fighting for what belongs to them by virtue of being human. This is what is providing society with the only coherence it has at a time the ruling circles have imposed a state of anarchy and violence at home and abroad and seek to force everyone to either submit or face the use of force against them. What they cannot control, they seek to destroy but so long as the people take their place in determining the character of the present period, there will also be a new period and more history will be made.

Canada is assisting the U.S., Britain, Germany, France, Japan and others all of whom have their own aim to dominate the world and hide the system of brutal exploitation of their own working people at home and wars of destruction abroad. The euphoria they created 30 years ago that socialism was finished and the world would be rejuvenated by ushering in a new period of democracy has evaporated. The realities of stepped up state-organized racist attacks, privatization and pay-the-rich schemes have destroyed the systems of health care, education, social programs and welfare. They continue to spoil the natural environment and exacerbate the climate crisis by giving priority to military spending, war production and infrastructure in the service of narrow private interests. The militarization of culture and life itself are matters of serious concern as well.

As we enter 2023, it is necessary to counter propaganda and fearmongering that the dangers to peace, freedom and democracy come from China and Russia. The aim to foster the feeling that they should not be permitted to exist so that they can no longer pose a danger to the world must be countered with sound, rational arguments based on facts of life, not fiction or belief. It is also necessary to counter the conclusion imposed that so long as the people protect the current constitutional order — known as the King’s democracy — and ignore that it gives rise to a racist, anti-people privileged elite which rules over the whole of society to its detriment, the world will see democracy and peace.

The role of the people in this entire calculation is missed altogether. The workers and middle strata are reduced to things which are disposable while the ruling class does not reckon that the people’s resistance tells another story. The people who are at the receiving end of their man-eating system of exploitation of humans and nature are a greater force and provide the material for a far greater truth than all that is being uttered on the world scale by the propaganda machines of all the big powers put together. The people from all walks of life have learned that there is no end in sight on the basis of the promises that they can trust those with power and privileges to set things right. The resistance struggles tell us that our security lies in the fight for the rights of all, not in governments of police powers.

The rulers are increasingly taking the road of retrogression and presenting this as the solution to the problems which the peoples face. Similar situations have been created in other countries. However, even though the world is going through this period of retreat, the character of the entire era has not changed. People wish to create a new society which is fit for their existence. This remains the main content of this entire era.

The situation itself engenders proposals for changes which are required to turn things around in a manner which favours the people. It is the human factor/social consciousness which must be activated to oppose the anti-human factor/anti-social consciousness of the rulers who have caved in totally to U.S. demands for the integration of the Canadian economy and infrastructure into the U.S. war economy and infrastructure.

CPC(M-L) calls on all to answer the call of history in 2023. Go all out to bring about changes which oppose the widespread retrogression and lift the political process to the level of the demands of the people. All out to humanize the natural and social environment, support the just demands of the Indigenous Peoples and for equal status for all citizens and residents, migrant workers, refugees and undocumented workers. Oppose state-organized racist and other attacks as well as the blocks to the protection of women and children and all those who are vulnerable due to their age, gender, sexual orientation, or any other criteria.

The time to define our own being is now!

Best wishes for success in all your endeavours in the New Year!